On A Mission From God.


My history with the Blues Brothers goes back to the early 80s. SNL didn’t show in Australia, although I had heard of it. I missed the film at the cinema, although I suspect it barely raised a blip on the local radar at the time. A friend mentioned it to me, and we managed to rent a copy. Remember video rentals? Remember Betamax? Yes, we were nerds, and knew it was a better technology than VHS. What we didn’t know was the licensing arrangements that would result in the global dominance of the inferior product.

But we watched it, and loved it, and made a copy so we could watch it again and again. Remember, pre-recorded videotapes were insanely expensive in those days. I certainly couldn’t afford them. 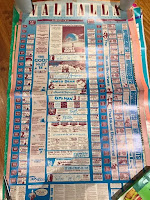 I ended up becoming a regular at the Valhalla Cinema in Melbourne. For several years, until they were forced out, they showed a fabulous selection of cult and art films. And they produced the most wonderful posters. I still have a couple, but they're in storage. Here's one I found on reddit.

This is where I saw many of these films for the first time. But Friday nights at 11pm was reserved for the Blues Brothers. Much like the participation screenings of the Rocky Horror Show in other cinemas, we dressed up, posed, danced and acted in front of the screen. I was one of the main Elwoods for several years. I don’t remember how many times I watched that movie in the cinema, but I remember I stopped counting my viewings (both on video and on the big screen) at around 186.

They had an old ford which they painted up and parked outside the cinema. The manager added me to their insurance, and with a friend, I was able to drive around Melbourne for an hour or two prior to the film commencing. Yep, dressed as Elwood and Jake we got to drive the Bluesmobile. I wish I had photos of that. 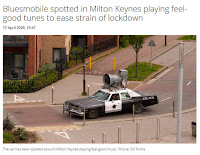 So it was with some pleasure I saw this article today. The Bluesmobile lives. During COVID 19 lockdown, it tools around Milton Keynes, playing tunes. While some of the music listed would never be on my playlist, nor Jake or Elwood’s, I like the idea. It should, however, be playing that sweet soul music. Sam and Dave, Otis Redding, Booker T and the MGs.