Despite the date on this post, it was actually written a couple of months later.  I have backdated it as I needed this to be the first post in this blog.

It has been many years since I've studied, but I have made the decision to return to University. This wasn't an easy decision, and the very thought of opening books and spending my spare time making notes and reading academic texts filled me with dread. I was very, very resistant. 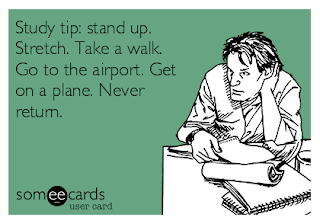 It was in my first week of studies that we were encouraged to keep reflective journals.

As an experienced teacher, reflective practice is something in which I engaged on an almost daily basis. It wasn't something I sat and wrote about, (as a teacher, who has time to do that?) but it was something I did as I went about my daily duties. Walking back to the office from a class, on the drive home, lying awake at 3am worried about a particular student - heck, even during the class and on the go. Of course there is a title for this, reflection in action.

But I decided to give it a go, and started keeping notes, reflecting on my own learning.  And then, because I am undertaking my Master of Digital Technology, Communication and Education, it felt somehow appropriate to reflect digitally.

Not all my reflective notes will appear here. Some will remain private, but I will share many of my own thoughts on my learning. I will also share bits and pieces I find interesting or somehow relate to my studies.

Those who are much more experienced in this field will undoubtedly consider some of the 'new to me' ideas quite naive, but I am on a learning journey, and I will be sharing things as I encounter them. Which reminds me of  a scene from Good Will Hunting where Will inserts himself into an encounter between his friend, Chuckie (who is pretending to be a Harvard student), and some real Harvard students in a bar who are trying to put him back in his place.

I'll do my best not to be Clark.

CHUCKIE: All right, are we gonna have a problem?

WILL: [interrupting] Of course that's your contention. You're a first year grad student. You just got finished reading some Marxian historian, Pete Garrison probably, you’re gonna be convinced of that until next month when you get to James Lemon, then you’re gonna be talking about how the economies of Virginia and Pennsylvania were entrepreneurial and capitalist way back in 1740. That's gonna last until next year, you’re gonna be in here regurgitating Gordon Wood, talkin’ about, you know, the Pre-revolutionary utopia and the capital-forming effects of military mobilization.

CLARK: [taken aback] Well as a matter of fact I won't, because Wood drastically underestimates the impact of —

WILL: "Wood drastically underestimates the impact of social distinctions predicated upon wealth, especially inherited wealth..." You got that from Vickers, Work in Essex County, Page 98, right? Yeah I read that too. Were you gonna plagiarize the whole thing for us—you have any thoughts of—of your own on this matter? Or do—is that your thing, you come into a bar, you read some obscure passage and then you pretend, you pawn it off as your own—your own idea just to impress some girls, embarrass my friend?